MEET SIMONE! She graduated from UNT with a degree in Journalism with a concentration in Digital and Print in December 2019. She is working as a Freelance Journalist. 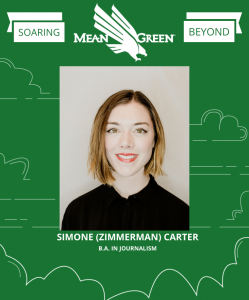 We asked Simone some questions, advice for current students, and how UNT helped her to succeed and SOAR BEYOND!

What advice do you have for current students as they decide what they want their next steps to be (internships/careers/workforce etc.)? My advice for current students who are trying to decide what their next steps are going to be would be to give everything a shot. Because again, I didn’t think that I was going to be a writer for the rest of my life, but it wasn’t until I tried writing out at the Denton Record Chronicle and the Dallas Morning News as an intern, that I realized it is what I want to do forever. And additionally, I would recommend that students not be afraid to send emails. Send cold emails. I think people often are nervous about how they come across or they don’t want to do the research. But, most of my success and writing gigs have come from just finding somebody’s email online and saying, Hey, do you need help? So I would just say, be a go-getter.

How did your program at UNT help you to feel prepared for this role? My program at UNT gave me all of the basic skills that I needed to be a freelance writer. Not only did I become much more efficient at writing, tips, and tricks along the way, how to construct a proper outline, etc. But it also gave me the people skills that I needed in a way to be an empathetic journalist. And I think that especially going into it, I just had no idea how to approach face to face interviews. And I also spent entirely too long on every story. So I would say that my professors at UNT were a huge help. And I’m forever indebted to them. I learned way more than I ever expected to. And they also, I feel, instilled their sense of passion in me for the craft.

How did you find your current role (website, email, word of mouth, etc)? I found my Dallas Morning News internship from one of my professors, actually a couple of them. Professor Todd Bennett suggested that I apply because I had been in one of his classes before. He said this might be up your alley. At the time I had already completed a Denver Chronicle internship. You only need one to graduate, so it was, why am I going to add an extra one on my plate? Later on, I spoke with professor Randy Loftis. He’s probably my favorite professor of all time. He reminds me of my dad, and so he also recommended that I apply for it, which I did. I reached out to Dr. Tracy Everbach. She outlined exactly what I needed to come up with for my portfolio, which was pretty extensive, incidentally. I had to put a lot of my previous work and a cover letter resume, which are good things to have if you’re trying to find a career. She also informed me that I would be taking a timed writing test. In lieu of a tough question, this is actually the toughest part of that application process. The timed writing test included … She sent me a news brief, rather, she sent me a police affidavit, and I had to construct a news brief within 30 minutes based on the information, just pure bones facts. That was quite nerve-wracking because like I said, I haven’t always been the most efficient writer. I turned it in with a minute to spare and found out shortly thereafter that I was the one who earned the internship. I was astonished. But I’m so happy that I went ahead and took my professor’s advice, all of them, and went through with the internship.

What is one unexpected benefit of your internship experiences? (in other words, some skill/perspective you gained/improved that you did not expect? One unexpected benefit that I gained from my internship was just how good I would become at writing news briefs. That is not something that I tend to want to do. I’m not necessarily the most cut and dry style reporter. Like capital H hard news Watergate investigative reporting style. I tend to veer more toward pro-style, like Dallas Observer weeklies, that kind of deal. And so I am completely grateful that I went to the Dallas Morning News because after that I feel 200% more confident writing hard news-style stories. And I’m much more familiar with the criminal justice system. So that was entirely unexpected.

As a journalist, how important is it to have a strong network of professional connections? As a journalist, I would say it is of the utmost importance to have a strong network of connections. Not only if you work in a newsroom environment where you have to get along with your colleagues and maintain amicable relations with them, but also with your sources because you don’t want to burn any bridges along the way. If you develop a beat, like a police beat or a music beat like I tend to do, you’re not going to want to make anybody angry and not be able to reach out to them if you ever need for a future story. But, as a freelance journalist, making connections proven to be the way that I get all my jobs now. If it hadn’t been for the connections I had made at the Denton Chronicle internship and the Dallas Morning News internship, I don’t know that I would be working as steadily right now, especially right after I graduated.

Being a writer of any kind is a uniquely challenging career, how do you feel being an intern has better prepared you to seek gainful employment after college? I would say that being an intern has been extremely helpful for my seeking employment after college. Not only did I learn a ton more than I ever thought I could fit into my brain, but like I previously mentioned, I made a ton of great connections. Not only that, but I could put them on my resume to help buffer it. When people are wanting to say, “What else has she written for?” They can see Denton Record-Chronicle and Dallas Morning News. Normally that gives me a pretty great response. And in fact, I recently started writing for Frisco Style Magazine. I got that position because of my previous work experience as an intern. And I also, my former editor at the Dallas Morning News offered me a freelancing gig at his current position in PR at Methodist Health System. Both of those two aforementioned outlets pay much better than any other freelance gig I’ve gotten. I won’t mention those publications, but it has helped me immensely.

How has working as a journalism intern improved your portfolio? So working as an intern has completely buffered my portfolio. It’s grown exponentially. I was producing anywhere from two to maybe five stories per week with the Dallas Morning News when I was there. So my by-lines have quadrupled. And so that’s really helped. But not only that, the prestige that that organization carries with its name has now been attached to my resume. So when people open my portfolio, I always include stories from the Dallas Morning News and from the Denton Record Chronicle, depending on where I’m applying. But it’s definitely helped my portfolio substantially.

What kind of effect do you think your internship has had on your writing? My internship has substantially improved my writing. I feel as though I’m actually a journalist now. Whereas before, when I was first entering school and prior to my internships, I almost felt like more of a blogger. But now I feel very comfortable charging people for my skills. Not only that, but I feel like my internships have helped me to improve different styles of writing. Like, I had mentioned before, I’m really comfortable with kind of a more casual tone, but now I feel like I could, hopefully someday work for a place like the New York Times or Washington Post. I would say my internship gave me a lot more, many more skills than I had coming into it.

Tell us about yourself. What is your story? What are some of your passions?  So I have a bit of a non-traditional story from the regular college student. When I was younger, I was actually a film actress and that prompted me to move to Los Angeles when I was 18 years old. And so I lived out there for six years and thought I was going to be an actor. But I found a job at this place called Origami Vinyl. It was a record store and part of my duties was to write record reviews basically. And that’s when I realized that I loved writing. Prior to that, I had only done English style writing, like papers and whatnot, and so I didn’t know that I really dug it the way that I do, but I’m really passionate about music. So I found that this was a perfect marriage of the two. Around that time, I realized that acting wasn’t going to work out and so I decided to move back home to Denton, where I’m from, and attend the University of North Texas. My overall goal, however, was to eventually get my master’s in library science. And I just kind of needed some sort of degree to graduate with to get to that end. So I figured out why not journalism, I’ll give it a try. But throughout my college career, I truly fell in love with it.

Want to hear more of Simone’s story? Check out her testimonial!

Would you like to be featured in our Soaring Beyond Success Series? Email Jeanette Hickl. We’d love to share your story!

Learn how to Connect with the Career Center

The UNT Career Center encourages persons with disabilities to participate in our events and meet with our staff. If you anticipate needing an accommodation or have questions about accessibility, please call 940-565-2105 in advance of the event or your visit.